The human imagination will always exceed our actual grasp. We dream of unique planets in faraway galaxies that will probably go unseen, deep underwater worlds that will go unexplored or about being superhuman, rocketing into the air. But that’s where the magic of the movies comes in. They can bring us as close to the ever turning gears and desires of the imagination as we can dare to venture. That’s why we need them.

Whew, so tough being so serious for so long. Anyway, I can imagine this Snapple description about the power of movies is something director Jon Favreau took to heart while he was making this brand-spanking new The Jungle Book, a wondrous feast for the eyes and childlike whimsies that, sadly, we all lose to time.

Now, many will be quick to label this movie a remake or a live-action reboot, but given the place of the Rudyard Kipling story in the annals of Public Domain Land there are so many iterations of The Jungle Book it seems fruitless to lump this is in with one silly animated version from decades ago. Hell, I could slap on a pair of red tightey-whiteys, swing on my curtains, film it on my computer and be able to throw it alongside with the other adaptations while screaming, “Pssh, at least mine has soul!”

My point being that it seems impossible to talk about this newer movie without mentioning the rag-time animated musical from Disney, which was a big enough challenge for all involved going in, despite the only similarities between the two being the name and company logo. However, they couldn’t be more different of beasts, and this newer beast swallows the animated one in a single gulp. It doesn’t even have to chew, like, at all. It’s that much more spectacular

While watching, I didn’t even have time to remember that there are other versions of the story. Once it absorbed me into such an alien, yet familiar, world anything else outside it seemed irrelevant. Thanks to the artists who worked on movie (as Favreau calls them, deservedly) the jungle seems greener and more endless than any nature documentary has captured, the trees grow taller than the tallest redwood and the animals brim with either cuddly cuteness or grandiose, intimidating fear.

Watching young Mowgli (Neel Sethi) dart from tree to tree alongside his wolf brethren with such immaculate realism reinvigorated in me was a long-dead sense of adventure, killed by taxes and searches for decent healthcare. A real world has been redefined as something mythic and magical like when Kipling first wrote the story. Utilizing a combination of the revolutionary effects of Avatar and the landscape cinematography of The Revenant, Book creates a CGI world from scratch, but has the added benefit of parents getting to leave the theater telling their kids, “You know, that place really exists.”

The rich detail and true awe of the movie truly shines, though, in the animals themselves. The muscles of bigger animals like Bagheera the panther (voiced by Ben Kingsley) and Shere Khan the tiger (voiced by Idris Elba) flex and contort as they pounce and pace menacingly, their fur gently flowing in the breeze, their enticing eyes brimming with emotion. Others, like Akela and Raksha the wolves (Giancarlo Esposito and Lupita Nyong’o) and Baloo the bear (Bill Murray) are equal parts cuddly and stoic as they stand tall on hilltops, or plop down on a patch of grass, also being able to exhibit immense strength and formidable animal aggression when protecting Mowgli. Meanwhile, King Louie the…giant monkey (Christopher Walken) looks…exactly like what I believed a giant monkey played by Christopher Walken should look like. 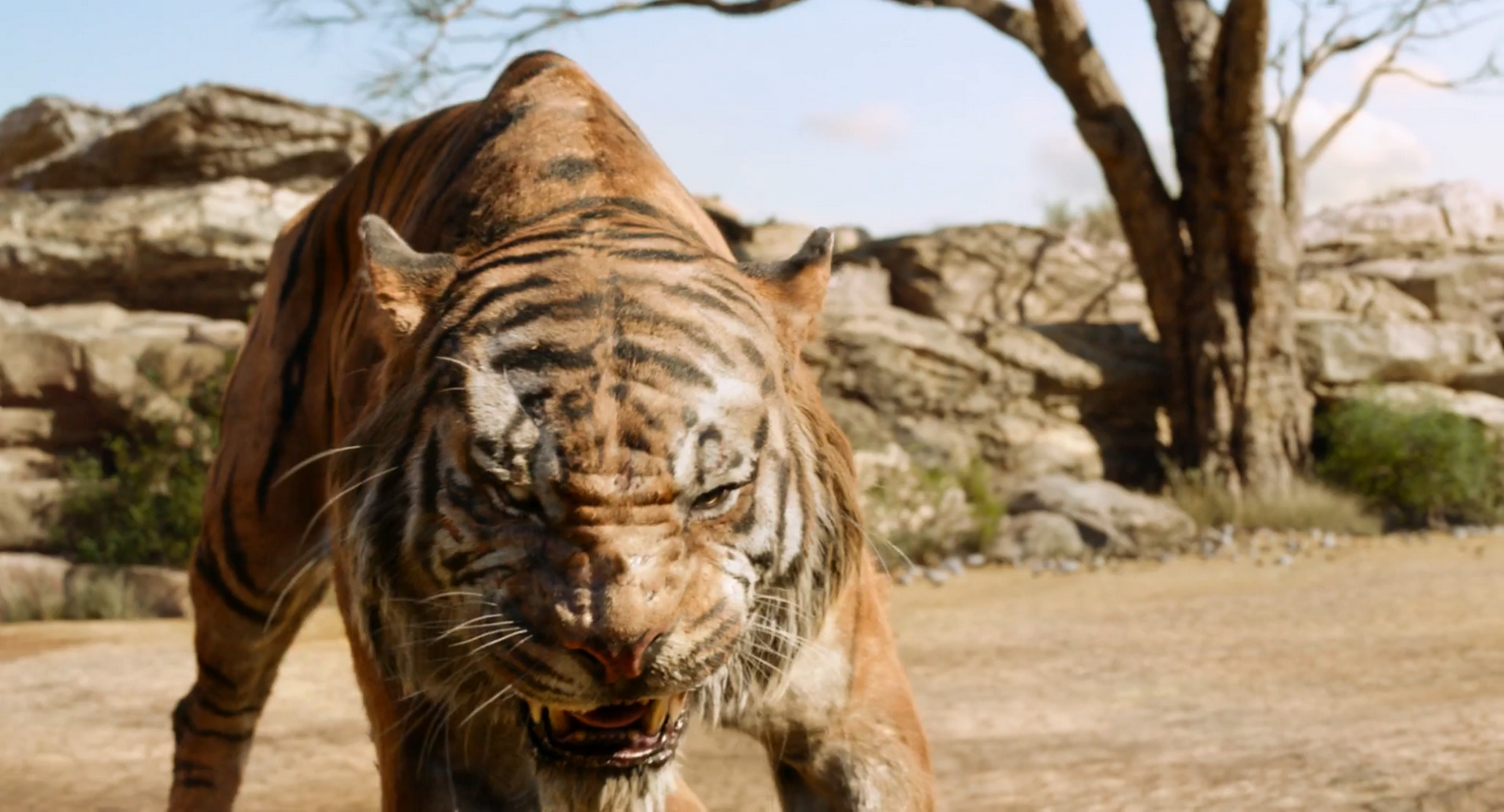 Most stunning, perhaps above the CGI, are the personalities behind the multi-colored eyes of these creatures. A perfectly assembled cast of world-class actors gives Book the pedigree of a Shakespearean drama, at times. Take for instance a scene between Akela and Khan, discussing the whereabouts of Mowgli, whom Khan would much prefer to see dead.

What could’ve been a simple scene of the two standing there, cutting back and forth between dialogue, morphs into a deceptively casual discussion, wherein we see Khan plop down gracefully and menacingly, followed by Akela. The two have a back and forth like something out of a great TV drama, before the tables are shockingly turned. The voices of Esposito and Elba give life and emotional heft to these characters. There are calculating minds and heartbeats underneath the pounds of fur. They don’t feel like goofy, cartoon portrayals. Elba in particular is manipulative, fearsome and powerful as Khan turning ink and pixels into a terrifying foe. As well, these intense inter-character interaction overflow into heart-stopping action set pieces. The fights between animals are particularly extraordinary, their power and ideals clashing with unspeakable ferocity.

I could waste all my space discussing the bevy of tremendous voice work, like Murray as the warm and delightful Baloo or Scarlett Johansson lending her naturally sexy, whispy voice to Kaa the snake. I would’ve never called snakes sexy before but, I mean, I’m not exactly above it now.

Taking up a hefty mantle in his first movie, Sethi as Mowgli works alongside the CGI characters (not motion capture, as some may expect) like a pro. Of course he had the help and skilled direction from Favreau, letting him know where to look and precisely stand, but the beauty about Sethi’s work is that he takes it seriously in the way a kid should. He immerses himself in the playful, oftentimes dangerous environment, like a kid playing on the playground, imagining the jungle and animals around him. His movements seem natural alongside the animals because he, like any child, was probably picturing them right next to him. It’s the perfect role for any child.

Mowgli takes us on a journey deep into the darkness and back into the light on an immense adventure that avoids the complexity and “grounded” style of many other live-action adaptations of modern fairy tales. The beauty of The Jungle Book is its simple adventure, designed only to wonder and amaze with a classic message of discovering yourself. The story was already told for writer Justin Marks, and he was smart enough to know where to make the characters seem fresh and where to let the adventure just play itself out. Then Favreau and Co. came along and made it look immaculate and then actors to bring the characters to life. It’s simplicity done beautifully.

That may not be enough for more demanding audiences, who want more dimensions brought out of talking bears and underwear-clad children, but what more do you want? A serious, whiney Mowgli contemplating life while The Cure plays? A modern day appropriation of Kafkaesque themes on mortality? It’s a movie with talking monkeys, for God’s sake. Sure, there’s a musical number by King Louie that, no matter how many excuses I try to make, seems too silly to fit. But hey, this minor flaw is for you, dissenting hipsters.

But despite for many to look for flaws in something so perfect is symbolic of the spirit of movies dying. The Jungle Book is non-stop imagination and adventure at work, and that’s exactly what the world needs. A movie made by people, for people, who only want to be dazzled and brought into an unseen world. And maybe, just maybe, the kid in us can be reborn for a few hours.

Yes, the human imagination will always exceed our actual grasp, but thanks to movie magic like this, at least we get a long stick to reach with. With it, those faraway galaxies don’t seem so far away and we can all be whisked away to a wondrous jungle with talking animals and boys in red underwear. Okay, that last part seemed off, but you get what I mean. Please God, get what I mean.

View all posts by Matt Rooney