While watching The Lego Movie in theaters in 2014 it was like my soul was teleported out of this “adult” shell and swapped with the soul of my younger, more doe-eyed childhood self. Every inch of color and Lego design made my mouth drop; my body moved with each playing of the endlessly catchy “Everything is Awesome” and; I laughed at each joke as if I’d never heard a joke before, and was amazed this was one way to elicit joy. It rose above the pre-conceived conceptions it would be a commercialized cash grab to sell more colored bricks and proved to be one of the most inventive major animated movies since Pixar unveiled Toy Story almost two decades before. But that was in 2014; since then we’ve gotten two more Lego spinoffs (Lego Batman, Lego Ninjago), and while there’s a plentiful amount of charm, humor and heart to make this newest outing – The Lego Movie 2: The Second Part – worth a watch, that ingenuity and surprise of the first has been replaced with a disappointing feeling of sameness.

Now, this doesn’t mean The Second Part isn’t a burst of colorful, witty, perfectly whacky fun. I mean, it’s hard not to watch a movie with endless meta references, a Lego Gandalf dressed for the apocalypse and not one, not two, but several Lego Bruce Willis cameos and not be highly entertained. While I and the audience had a good time watching the movie – with kids giggling at the cuter bits and adults laughing at the bits they’ll have to explain to their kids on the car ride home – it was clear this was a sequel made by filmmakers who had no idea they were going to have to make a sequel in the first place, and that creative spark that fueled the first movie has slightly dimmed in the attempt to deliver on much of the same they had done before.

The biggest toll this takes is on the story. The finale of the first movie showed that, like Toy Story, these figures exist in a world of playtime created by a very real young boy, who in the end changed his overbearing father’s heart and mind through the spirit of creativity. Now having to share this new world he made with his dad with his younger sister, the Lego world has devolved into Mad Max-style desolation at the mercy of his young sibling’s Duplo blocks. In this new Lego world, Lucy (Elizabeth Banks) can’t help but see Emmett’s (Chris Pratt) cheeriness as a flaw when he should be bleak and brooding. Emmett has no choice but to toughen up when a mysterious alien force kidnaps Lucy and some of the other major characters to bring back to the dreaded Systar system (get it, it’s like sister, but all galactic and stuff), forcing him to become the hero and save the day.

The first movie’s story dazzled by having the adventure take Emmett and Lucy through a series of Lego worlds both colorful and unique, filled with characters of original creation and from pop culture mega figures like Batman and Star Wars. While this story is also filled with plenty of eye-popping locations — given a quirky, sci-fi setting — the movie lacks the hero arc and strong character narrative that made the first journey worth going on. Here, characters are split up and are constantly in motion to save one another through a series of increasingly insane, kaleidoscopic set pieces that it feels more like a quest from set piece to set piece, robbing the story of any emotional depth between the characters. Now, this won’t matter to the least demanding of viewers, especially the ones with candy smeared on their face, but anyone expecting the same clever storytelling from the first is in for less of that and more absurd characters and musical numbers. 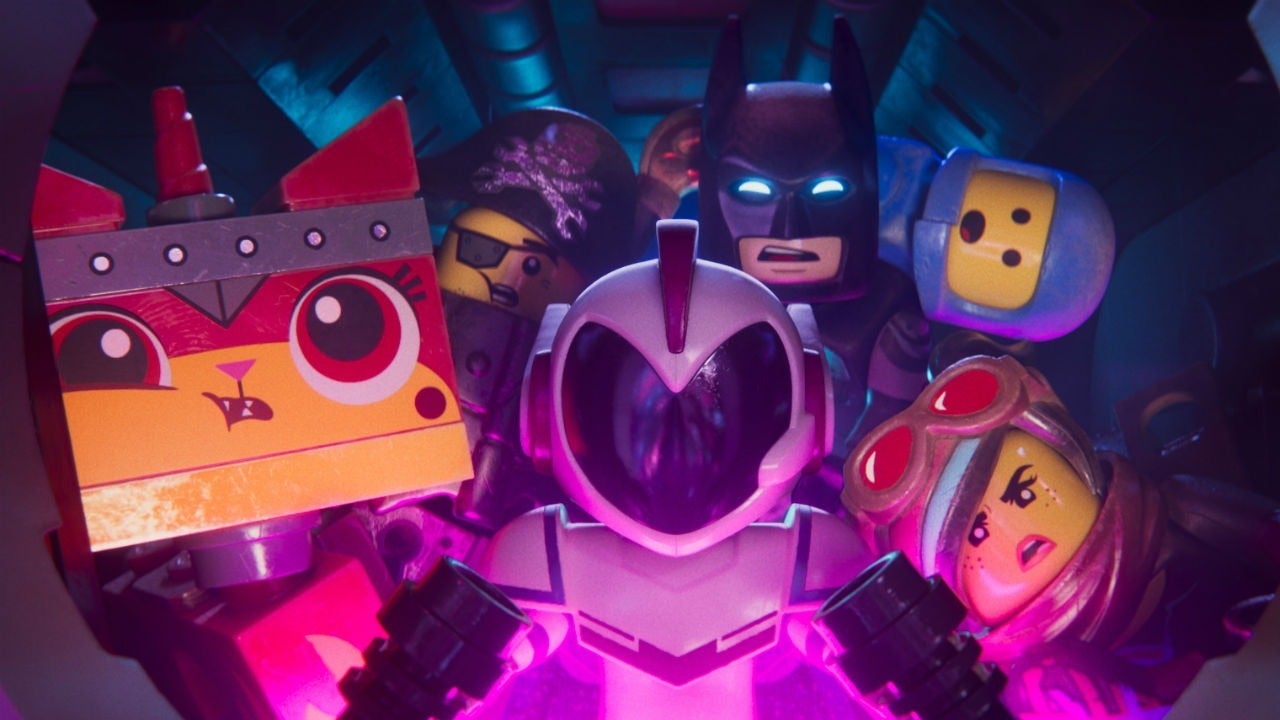 And, did I mention there were a lot of musical numbers in this movie? There are. Probably too many. A callback to the original “Everything is Awesome” is expected, as that song was a defining element of the first movie. But then Tiffany Haddish gets two major musical numbers, on top of the rolling out of the new hit single meant to get people listening on the car ride home, “Catchy Song.” In a story that feels too rushed having this many breaks for giant musical numbers meant to send us all into a candy-colored, sugar-rushed coma, it can’t help but feel like sensory overload.

Okay, on the surface it seems like I’m just railing against this movie for having too simplistic a story and too many colorful musical numbers – which makes me sound like a stuffy grandpa. But the truth of the matter is there’s so much silliness to make this movie almost always entertaining. Will Arnett is once again great as the returning Batman, with a cavalcade of stars giving voices to characters like Superman and Abraham Lincoln (Channing Tatum and Will Forte) and all the way to a banana that’s constantly tripping over himself (Ben Schwartz). The strongest new character is Rex Dangervest, an amalgamation of Chris Pratt’s other career-defining characters, most of which he’s introduced since his star took off after the first movie. He’s a clever character that could’ve been a throwaway side piece but ends up becoming part of the story in a major way, which begs the question how much screenwriters Phil Lord and Christopher Miller wanted to reflect Pratt’s own stardom back at him.

The movie is able to skate by many of its flaws thanks to this abundance of charm and laughs, throwing out clever meta references and tongue-in-cheek gags that set this series of Lego movies apart from the onslaught of other computer animated movies. These movies do have a voice of their own, and Lord, Miller, and director Mike Mitchell are sure to keep most of that voice alive by pairing the story with the real-world setting of a sister just trying to play with her brother – coming to a finale that’s much more emotionally effective than the rest of the story leading up to it. The movie itself may not be as strong, but the people who made it at least understand the world they’re working in and do a solid job proving why it’s such a fun place to revisit.

That being said, don’t go into this movie expecting the same level of quality as from the first. That first movie is far too good and this one can’t quite match it in nearly any way. Does that mean you won’t have fun watching it? Of course not. You got Lego Batman, Lego Superman, Lego Bruce Willis, Lego cats and all sorts of colorful distractions filled with wit and charm. So, no, it’s the kind of animated movie I’ll look forward to watching with my own kids one day, hoping it will spark in them the spirit of imagination. However, I will put it on to distract them while I hover over tax forms and recall the mistakes I’ve made in my life. For that, this movie is perfect.

View all posts by Matt Rooney